JOALI, the first immersive art luxury resort to open in the Maldives, features a full array of eco-inspired artworks and high-concept sustainable design

Conceived as an immersive island retreat, JOALI Maldives showcases an array of original, experiential works of art and dynamic design, reflecting the beauty of nature, and with sustainability at their core. Situated on the idyllic isle of Muravandhoo in the remote Raa Atoll, just 45 minutes by seaplane from Male, this unspoilt island celebrates the creativity of world-class talent.

Art
Dotted around the resort, adorning villas and hidden beneath the waves are a collection of  extraordinary works by 13 international artists, hand-picked by curators and concept developers of No LaB; Ala Onur and Zeynep Ercan. From sculptures to design and experiential pieces, No LaB has chosen pieces which capture and conserve nature both visually and materially. Each artwork is thoughtfully integrated into their natural surroundings: some pieces were created by artists on-site, other creative concepts were adapted for Joali’s tropical climate. Joali will continue to curate surprising interactive art experiences, with new pieces added throughout the year. An annual art calendar will host a roster of workshops and residencies with visiting artists, designed to inspire, inform and enchant.

Heron Chair & Manta Ray Treehouse – Porky Hefer, Cape Town:
Vernacular architect Porky Hefer, who recently partnered with the Leonardo DiCaprio Foundation at Art Basel, displays his signature passion for local wildlife and endangered species, with his hanging ‘Heron’ chairs, which overlook the beach. The grey heron is the national bird of the Maldives and Joali’s signature, spirit animal. Hefer’s astonishing Manta Ray hideaway, woven in-situ from natural materials (WHAT) is suspended in the trees, experiential dinners in the treetops. His imaginative, nature-inspired works are designed for functionality as well as style, and have a message of conservation.

Club Tropicana Table & Underwater Coral Sculpture Garden – Misha Kahn, New York:
Renowned for his sculptures which use unconventional materials, including recycled rubbish, bronze and glue, at Joali, Kahn has created an underwater sculpture garden using a combination of vibrant-coloured and pale mosaic tiles to reflect the coral bleaching occurring in the Indian Ocean. Visitors to the island will be able to snorkel or dive to interact with this piece, and coral itself will gradually attach as part of the regeneration of the reef. Above land, Kahn’s Gaudi-esque communal table, which echos the shapes of the underwater pieces, is the perfect spot for sunset drinks and experiential dining experiences overlooking the beach. 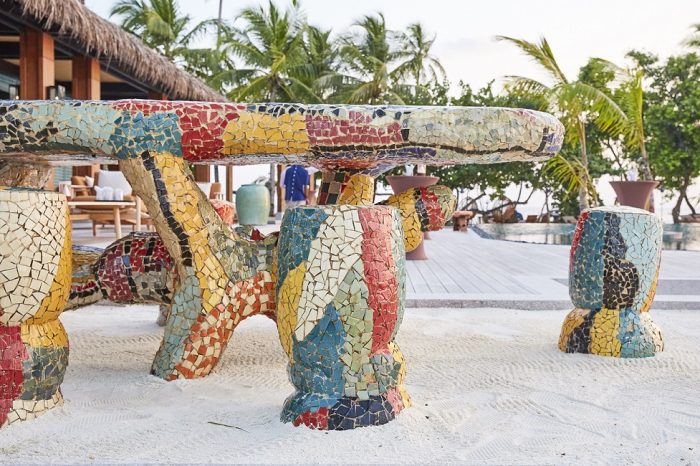 Evolution Chair – Nacho Carbonell, Spain:
Recreated especially for Joali with materials like sand and tree sap, Nacho Carbonell’s iconic Evolution chair has been adapted for the tropical climate. The cocoon-like chair offers a private moment of quiet introspection to anyone seated inside its depths. 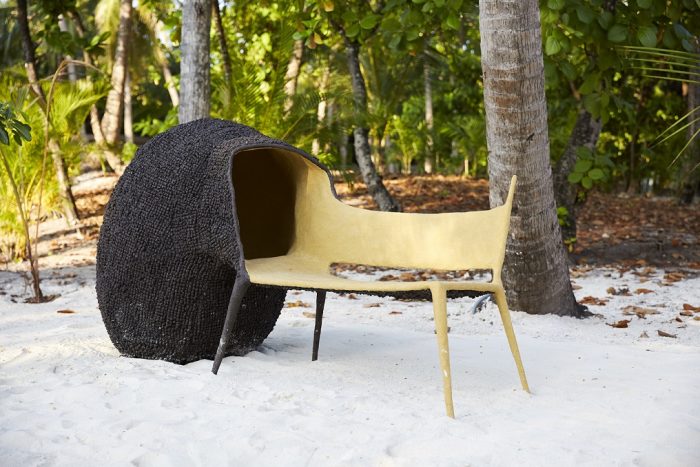 Bench for birds & humans – John Paul Phillip, Connecticut:
Adding a touch of timelessness to the natural landscape with his abstract style, John has created a special version of his celebrated Bench with a mini heron sculpture, for the island’s human and bird visitors to rest and reflect among the palm trees, along with a ledge to place a cold drink. 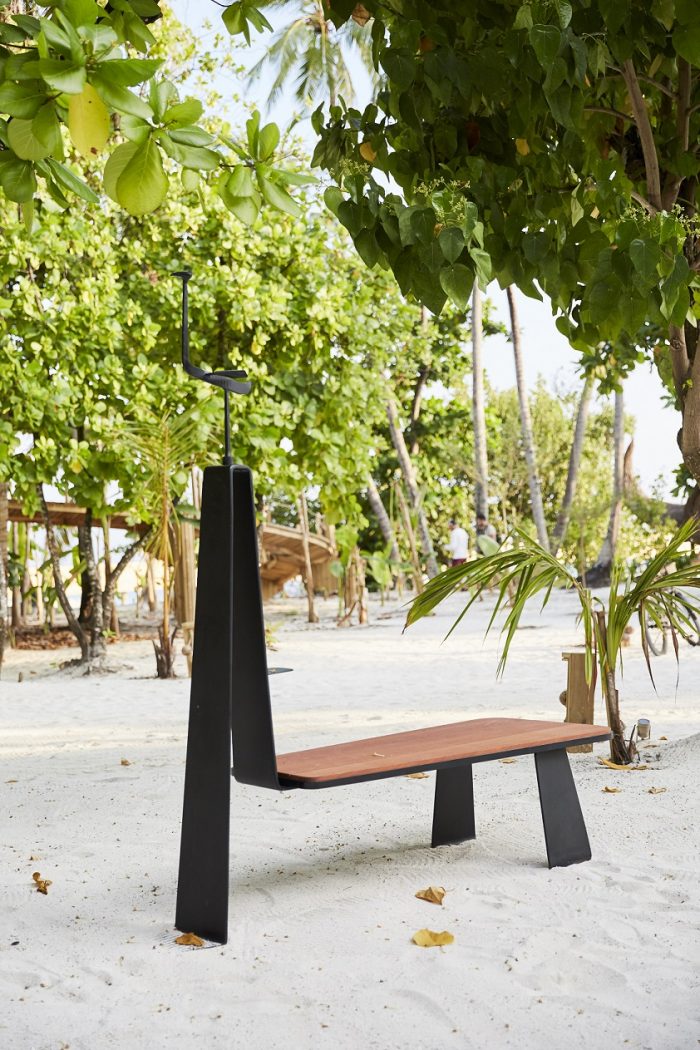 ‘PEARL’ wall art – Seckin Pirim, Istanbul:
On the wall of each villa, an eye-catching clam-like centrepiece by Seckin Pirim have a ripple shape reminiscent of the aquamarine waters surrounding the island. Pirim’s installations are a reflection on his childhood memories and pick up on the varied tones of brilliant sea blue around Joali. 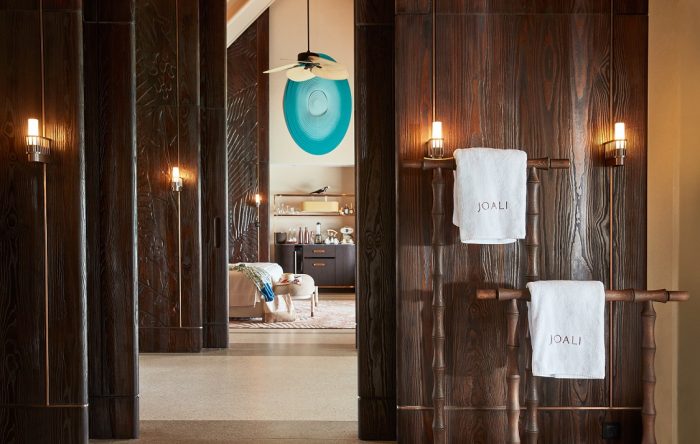 Thread tapestries – Soojin Kang, South Korea:
Believing in a human need to rediscover the art of hand-crafting their own furnishings with needle and thread, Soojin has woven elaborate tapestries for Joali’s Four Bedroom Beach Villa using only natural materials. The scale of the pieces accentuate the high ceilings with long strands flowing artistically down the wall from top to bottom.

Maldives Vibes – Zemer Peled, Israel:
Inspired by the Maldives’ rich underwater world and appearing in Joali Spa, this dramatic sculpture comments on the issue of coral bleaching affecting the region, with striking bursts of colour against a stark white backing reflecting a hope for future regeneration. 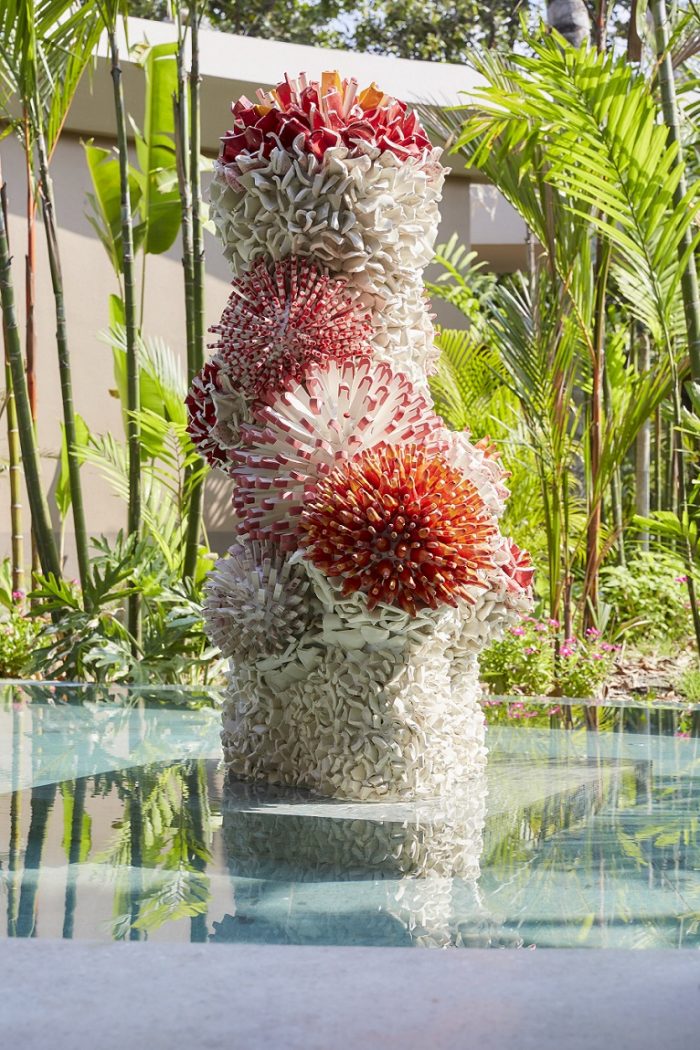 Maldivian Heron mural & beach kaftans – Ardmore, Cape Town
Ardmore’s textile pattern for Joali uses the emblematic grey heron and frangipani seen on the island, and evokes the exoticism and remoteness of this tropical location. No LaB adapted this pattern for the stylish in-villa beach kaftans designed for guests to gallivant in, as well as special hand-carved panels for Joali’s Bellini restaurant. 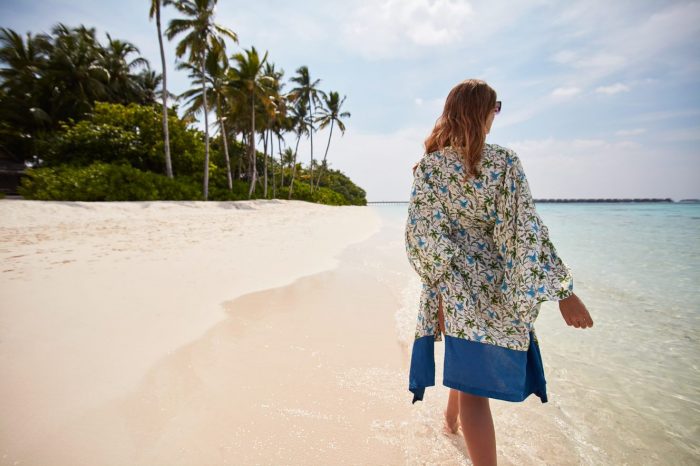 Terracotta Furniture – Chris Wolston, United States:
Inspired by his past experience working in a Colombian brick factory and emphasising the importance of human influence on the production process, Wolston has created a set of clay chairs where the finger marks of the artist can still be seen. Residing outside Joali’s Boutique, these intricately-detailed chairs contrast with the beautiful fauna around them, and challenge visitors to take a seat.

Glass Pineapples & Coral – Feleksan Onar, Turkey:
With a gift for forming glass into intricate objects, Onar’s tropical, pink-tinged glass drinks decanter in the shape of a pineapple and coral, is an amusing, eye-catching element to each of the villas’ mini bars.

Ceramic Mini Stools – Reinaldo Senguino, Venezuela:
Inspired by shapes of the tabletop Tepuis mountains of his native Venezuela and the curvilinear forms of heritage hourglasses, Senguino’s clay stools using mud from the Guiana Highlands’ region’s rivers, designed to last for many years, absorbing the sun’s warmth and the tales of the guests who enjoy sitting on them as time passes by.

Design
Joali’s impressive roster of artworks are integrated with impeccable design and architectural skill by acclaimed Istanbul-based Autoban, whose other projects include House Hotels Istanbul and London’s Duck and Rice. They used custom-made furnishings, hand-carved wooden panels, local wood, bamboo and terrazzo flooring to create the ultimate sense of jungle chic. In designing the resort, Autoban worked to preserve the natural flora of the island as much as possible, saving more than 1,000 palm trees in the process. On arrival, guests are wowed by an impressive Manta Ray-shaped welcome jetty complete with undulating Maldivian thatched roof crafted by Istanbul’s Atölye4n, while Tokyo-based Studio Glitt are behind standout Japanese restaurant SAOKE, with its majestic pyramid roof made up of timber blocks like origami, with clean lines and soft lighting reflecting Japanese aesthetics.